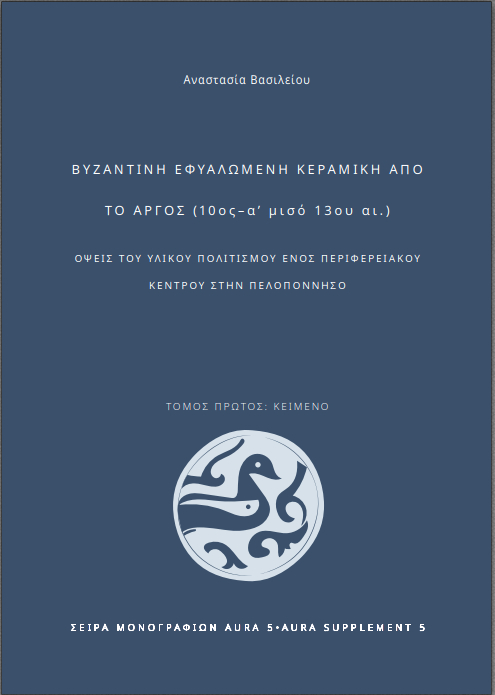 
This monograph focuses on the glazed pottery from Argos, dating from the Middle Byzantine to the first decades of the Frankish period (c. 10th – first half of the 13th century). This pottery was found in rescue excavations by the Hellenic Archaeological Service mainly in the 1980s and 1990s and has remained for the most part unpublished.

The first volume consists of two parts. The first part contains the presentation of the material, which is divided into Glazed White Wares and Glazed Red Wares; the latter make up by far the majority of the material. The second part contains the data analysis based on the ceramics’ shape, use, slip, glaze, decoration and fabric. Conclusions are drawn in two main directions: firstly the new evidence which the Argive material contributes to the general research into Middle Byzantine glazed pottery and secondly what it tells us about Middle Byzantine Argos, of which we know little from the sources. There are also two appendices: the first deals with the main classifications in Middle Byzantine glazed pottery and the second gives data on the excavated plots in which the pottery in question was found.

In the second volume there is a detailed catalogue of selected specimens with their ‘identity’ (findspot, fabric, shape, slip, glaze, decoration, proposed dating), any parallels, photos and drawings.

This research confirms the important role of Byzantine pottery and material culture in general in providing valuable evidence on the historical and sociological conditions of the time. This ceramic material documents the existence of a vibrant society, which – though located in the periphery – was in touch with the main trends of the period.