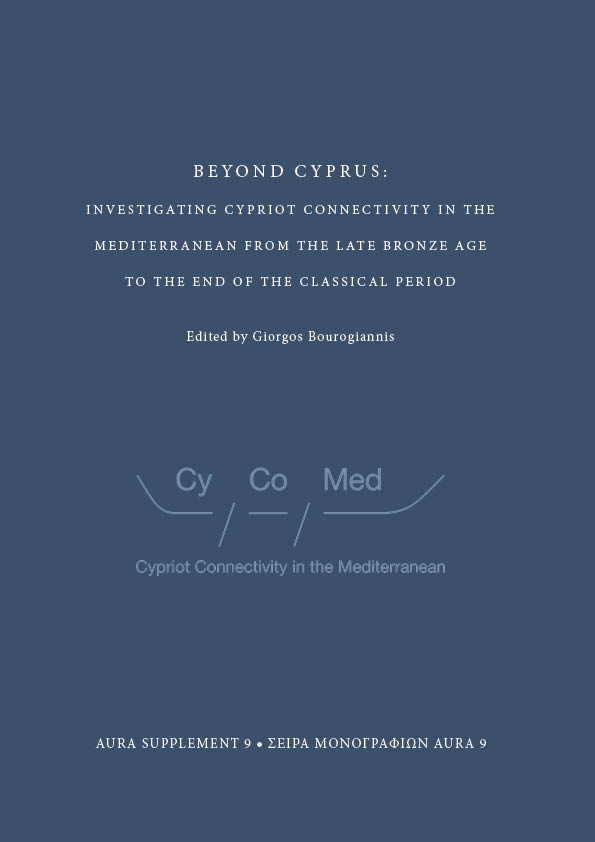 Τόμος 9 (2022). Beyond Cyprus: Investigating Cypriot Connectivity in the Mediterranean from the Late Bronze Age to the End of the Classical Period


This volume is largely based on papers presented at the international conference “Beyond Cyprus: Investigating Cypriot Connectivity in the Mediterranean from the Late Bronze Age to the End of the Classical Period”, that was held digitally on 8–11 December 2020, under the auspices of the Institute of Historical Research of the National Hellenic Research Foundation.

The conference was organised by the editor of the volume as part of a postdoctoral research project under the same name (acronym CyCoMed), funded by the Hellenic Foundation for Research and Innovation (HFRI) and the General Secretariat for Research and Innovation (GSRI) within the framework of the first HFRI advertisement for postdoctoral research projects, under grant agreement no. 481.

The principal research questions treated in the volume are closely related to the examination and interpretation of Cypriot archaeological, epigraphic and numismatic evidence from extra-insular sites, as well as to the definition of the role Cypriots may have played as participants in the maritime contacts of the ancient Mediterranean. All 41 papers contained in this volume were externally reviewed and revised for publication. They cover a time range that spans approximately the Middle Bronze Age to the Roman period (early second millennium BC to ca AD 300). Equally numerous are the geographic entities examined, covering a large area, from the eastern Mediterranean and the Black Sea to the Iberian Peninsula, thus providing an overview of Cypriot evidence throughout the Mediterranean.

Jennifer M. Webb Cyprus’ maritime connectivity before and during the transition to the Late Bronze Age. The case of the north and northwest (23-34)

Eleni Mantzourani and Giorgos Vavouranakis The anthropomorphic figurines of Cyprus in the Bronze Age. Style, local traditions and foreign associations (35-44)

Hartmut Matthäus Cyprus, Egypt and the Levant during the Late Bronze Age. New evidence from ­Enkomi (63-72)

Hanan Charaf Disentangling the relationships between Cyprus and Lebanon during the second millennium BC. What Sidon can bring to the table (89-108)

Tatiana Pedrazzi Canaanite jars in Cyprus in the 13th–12th centuries BC. Transfer of goods, transformation of networks (119-130)

Angelos Papadopoulos Cypriot products and Cypriots away from the coast? A view from Late Bronze Age Tell el-Hesi (131-140)

Anna Lekka Pottery fashion in the Late Bronze Age. Αn overview of the stylistic similarities between Cypriot and ­other local wares in the Mediterranean (153-178)

Jan Sienkiewicz Social assemblages of things. Drinking practices and inter-cultural interaction between Rhodes and Cyprus in the Late Bronze Age (225-238)

Foteini Zervaki From Cyprus to Rhodes and beyond. Cypriot imports and influence in Rhodes in the 11th and early 10th centuries BC. Links to the Aegean and the central Mediterranean (239-250)

Anna Lucia D’Agata Networks of similarities, worlds of shared practices. On the use of the term koine for the connections between Cilicia and Cyprus in the first centuries of the first millennium BC (263-272)

Giuseppe Garbati Cypriot (?) gods beyond Cyprus. Some notes on the western Phoenician evidence (287-304)

Adriano Orsingher Sailing east. Networks, mobility, trade and cultural exchanges between Cyprus and the central Levant during the Iron Age (305-323)

Konstantinos Kopanias, Dimitris Papageorgiou, Chara Theotokatou and Ioannis Voskos External contacts and a reassessment of socio-political evolution in the Kouris region during the Late Bronze Age and Early Iron Age (323-334)

Anna Georgiadou and Maria Dikomitou-Eliadou The Iron Age pictorial pottery of Salamis within and beyond. An overview of ceramic styles, wares and fabrics (335-350)

Francisco J. Núñez The beginning of the Cypro-Archaic I period. A revision proposal (351-364)

Giorgos Bourogiannis Cypriot Black-on-Red pottery in Early Iron Age Greece. In search of a beginning and an end (365-388)

Nota Kourou The artist and the donor. The inscribed statuettes of Cypriot type found in the Aegean ­revisited (399-410)

Alina Dimitrova Beyond Cyprus. The evidence from the Black Sea (437-448)

Anne Destrooper-Georgiades The evolution of the specific contribution of Cypriot coins in the relations of the island with other geographic entities in the Eastern Mediterranean during the Achaemenid period. The case of Kition and Salamis (449-460)

Anna Cannavò Mercenaries. Cypriots abroad and foreigners in Cyprus before the Hellenistic period (473-484)

Eirini Paizi Cypro-Archaic and Cypro-Classical pottery from the Knossos Unexplored Mansion. New evidence on connections between Crete and Cyprus (509-518)

John Lund Cypriot connectivity from the Late Classical to the Roman periods. A diachronic ­perspective (553-564)